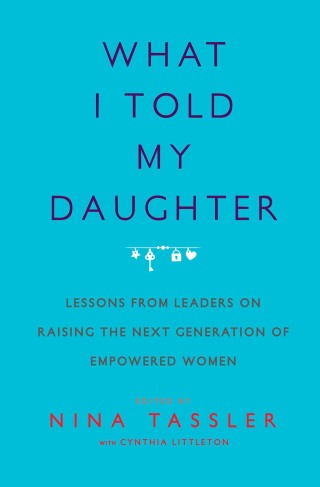 What I Told My Daughter

Lessons from Leaders on Raising the Next Generation of Empowered Women

Empower yourself and the latest generation of girls with this collection of inspiring reflections from notable, highly accomplished women in politics, academia, athletics, the arts, and business, including Madeleine Albright, Ruth Bader Ginsburg, and more.

In What I Told My Daughter, a powerful, diverse group of women reflect on the best advice and counsel they have given their daughters either by example, throughout their lives, or in character-building, teachable moments between parent and child.

A college president teachers her daughter, by example, the importance of being a leader who connects with everyone—from the ground up, literally—in an organization.

One of the country’s only female police chiefs teaches her daughter the meaning of courage, how to respond to danger but more importantly how not to let fear stop her from experiencing all that life has to offer.

A bestselling writer, who has deliberated for years on empowering girls, wonders if we’re unintentionally leading them to believe they can never make mistakes, when “resiliency is more important than perfection.”

In a time when childhood seems at once more fraught and more precious than ever, What I Told My Daughter is a book anyone who wishes to connect with a young girl cannot afford to miss.

Nina Tassler: Nina Tassler was the chairman of CBS Entertainment and has nurtured some of the most popular shows in television, including The Big Bang Theory, How I Met Your Mother, ER, and the critically acclaimed The Good Wife. She also helped shepherd the global phenomena CSI and NCIS to the screen. Tassler serves on the board for the Academy of Television Arts & Sciences Foundation and is a member of the Board of Trustees for Boston University. She lives in Los Angeles with her husband and two children.