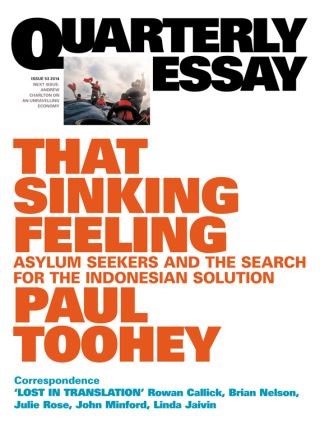 Asylum Seekers and the Search for the Indonesian Solution

Tony Abbott promised to stop the boats. With the help of Kevin Rudd’s “PNG solution,” he has. But at what cost?

In Quarterly Essay 53, Paul Toohey tells the dramatic stories of asylum seekers heading from Java to Australia, investigates people-smuggling and witnesses the aftermath of a sinking at sea.

Toohey also examines Australian attitudes to boat people, and what politicians have made of these. He assesses the diplomatic fall-out from turning back boats and asks: have we missed our chance for an Indonesian solution, a realistic alternative to the brutally effective system we now have? This is an unflinching look at people at their worst and best – and most ruthless and most vulnerable – by one of Australia’s finest reporters.

“Any hope for a genuine regional solution rested with Indonesia, the final stepping stone to Australia … Why did neither Howard, in his better times with Indonesia, or Labor, from 2007, seek a one-on-one solution with Indonesia? ‘The Indonesian Solution.’ Those words would have been the most convincing political statement any Australian government could ever deliver to Australian voters on asylum seekers.” —Paul Toohey, That Sinking Feeling

‘…one of the most useful and important of Black Inc’s long series of Quarterly Essays’ —Paul Monk, Weekend Australian

‘…no one can doubt the time Toohey has put in on ground most of us are unacquainted with. This honest and highly readable essay should… be engaged with by anyone yearning towards a humane outcome for those who seek sanctuary with us.’ —Thomas Keneally, The Age

‘That Sinking Feeling is not written to appease either side of politics, but to provide a deeper understanding of a complex situation by telling a human tale that has too often been drowned out by the screaming match.’ —Walkley Magazine

Paul Toohey: Paul Toohey is chief northern correspondent for the Australian. He won a Walkley Award for his first Quarterly Essay, Last Drinks: The Impact of the Northern Territory Intervention. He was previously a senior writer at the Bulletin and is the author of three books: God’s Little Acre, Rocky Goes West and The Killer Within. He has won the Graham Perkin journalist of the year award and a Walkley award for magazine feature writing. He lives in Darwin.