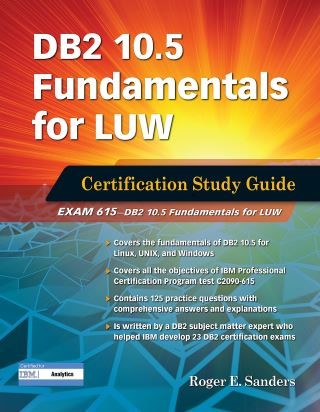 This book covers everything a reader needs to know to take and pass the DB2 10.5 Fundamentals for LUW certification exam. The comprehensive guide takes the reader through each of the topics: planning; security; working with databases and database objects; working with DB2 data using SQL and XQuery; working with DB2 tables, views, and indexes; and data concurrency. This book contains a complete practice exam with 125 questions, which closely models the actual 615 exam, along with a detailed answer key.

Roger E. Sanders: Roger E. Sanders is a DB2 for LUW Offering Manager at IBM. He has been working with DB2 for Linux, UNIX, and Windows (DB2 for LUW) since it was first introduced on the IBM PC (as part of OS/2 1.3 Extended Edition) and is the author of 23 books on relational database technology (22 on DB2 for LUW; one on ODBC).For 10 years, Roger authored the Distributed DBA column in IBM Data Magazine (formerly DB2 Magazine), and for three years, he served as President of the Triangle DB2 User’s Group (TriDUG), a regional DB2 user’s group that meets in Research Triangle Park, North Carolina. Roger has also written articles for publications like Certification Magazine and IDUG Solutions Journal (the official magazine of the International DB2 User's Group), authored DB2-related tutorials and articles for IBM's developerWorks website, presented at a variety of International DB2 User’s Group (IDUG) conferences and regional DB2 User’s Group (RUG) meetings, taught numerous classes on DB2 Fundamentals and DB2 for Linux, UNIX, and Windows Database Administration, and has participated in the development of 23 DB2 certification exams. From 2008 to 2015, Roger was recognized as an IBM Champion for his contributions to the IBM Data Management community; in 2012, he was recognized as an IBM developerWorks Master Author, Level 2 for his contributions to the IBM developerWorks community. He lives in Fuquay-Varina, North Carolina (population 39,042).