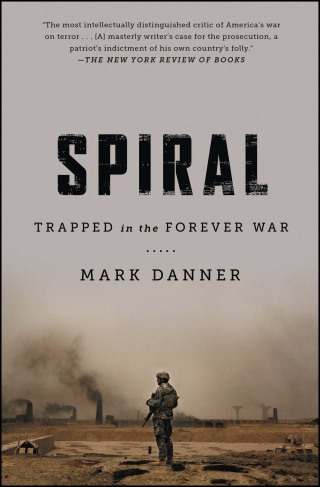 Trapped in the Forever War

In “a clear-eyed and shrewd examination…of how the US seems to be mired in a losing and intractable battle against global terrorism” (Publishers Weekly), Mark Danner describes a nation forever altered by President George W. Bush’s war of choice after 9/11.

The War on Terror has led to fifteen years of armed conflict, the longest war in America’s history. Al Qaeda, the organization that attacked us on 9/11, has been “decimated” (the word is Obama’s) but replaced by multiple jihadist and terror organizations, including the most notorious—ISIS.

Spiral, explains Mark Danner, is what we can call a perpetual and continuously widening war that has put the country in a “state of exception.” Bush’s promise that we have “taken the gloves off” and Obama’s inability to define an end game have had a profound effect on us even though the actual combat is fought by a tiny percentage of our citizens. In the name of security, some of our accustomed rights and freedoms are circumscribed. Guantanamo, indefinite detention, drone warfare, enhanced interrogation, torture, and warrantless wiretapping are all words that have become familiar and tolerated.

And yet the war goes badly as the Middle East drowns in civil wars and the Caliphate expands and brutalized populations flee and seek asylum in Europe. In defining the War on Terror as boundless, apocalyptic, and unceasing, Danner provides his “chilling cautionary tale of Orwellian repercussions” (Kirkus Reviews). Spiral is “a timely, valuable book” (San Francisco Chronicle) that is “an excellent resource for those who want to understand Middle East unrest and the ISIS terrorism threat without being Middle East scholars” (Library Journal).

Mark Danner: Mark Danner has written about foreign affairs and American politics for three decades, covering Latin America, Haiti, the Balkans, and the Middle East. He was for many years a staff writer at The New Yorker, and contributes frequently to The New York Review of Books, The New York Times Magazine, and many other publications. He teaches at the University of California, Berkeley, and at Bard College and speaks widely about America’s role in the world. Among his books are Spiral, Stripping Bare the Body, Torture and Truth, and The Massacre at El Mozote.