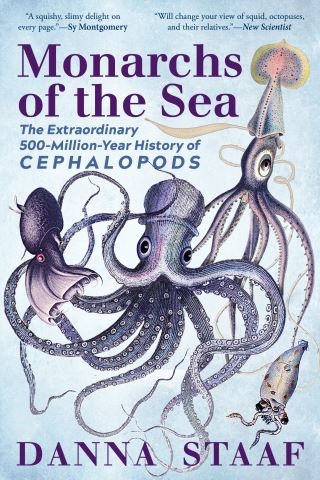 Monarchs of the Sea

The Extraordinary 500-Million-Year History of Cephalopods

Publisher’s Note: Monarchs of the Sea was previously published in hardcover as Squid Empire.

Cephalopods, Earth’s first truly substantial animals, are still among us: Their fascinating family tree features squid, octopuses, nautiluses, and more. The inventors of swimming, cephs presided over the sea for millions of years. But when fish evolved jaws, cephs had to step up their game (or end up on the menu). Some evolved defensive spines. Others abandoned their shells entirely, opening the floodgates for a tidal wave of innovation: masterful camouflage, fin-supplemented jet propulsion, and intelligence we’ve yet to fully measure. In Monarchs of the Sea, marine biologist Danna Staaf unspools how these otherworldly creatures once ruled the deep—and why they still captivate us today.

Danna Staaf:
Danna Staaf earned a PhD in invertebrate biology from Stanford University and has been studying cephalopods for decades. Her writing on marine life has appeared in Science, Atlas Obscura, and many other outlets, while her research has appeared in the Journal of Experimental Biology, Aquaculture, and others, as well as in numerous textbooks. She is the author of Monarchs of the Sea and Nursery Earth. She lives with her family in Northern California.