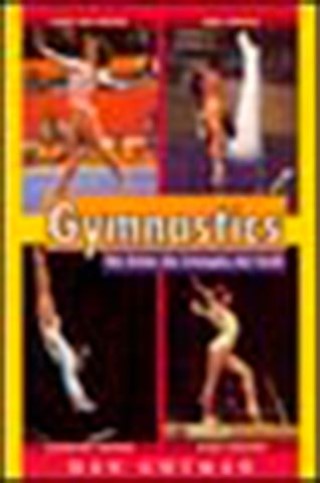 How did Kerri Strug go from Olympic hopeful to Olympic champion? How does Dominique Moceanu spend a typical day?

This thorough, fun-to-read book answers those questions and many more. You'll learn the ins and outs of the equipment and events, find out how scoring is done, read about the history of the sport, and lots more!

Dan Gutman's insider look at gymnastics has been fully updated to include the 1996 Olympics and is sure to enthrall aspiring gymnasts and devoted fans alike.

"A glossary, a chronology, and an entertaining chapter of gymnastics trivia round out this easily read, timely overview of a popular sport."—Booklist

Dan Gutman is the author of many books for children, including Ice Skating, Taking Flight: My Story by Vicky Van Meter, and World Series Classics. He lives in Haddonfield, New Jersey.

Dan Gutman: "I was born in New York City on October 19, 1955. When I was about a year old, my family moved to Newark, New Jersey, where I spent my childhood. It was pretty uneventful until June 1, 1968, when I came home from a Little League game and found that my dad had suddenly abandoned my mom, my sister Lucy, and me. It was pretty traumatic, as you can imagine, but we all survived.

"I attended Rutgers University in New Brunswick, New Jersey, graduating in 1977 with a degree in psychology. After spending a few unhappy years in graduate school, I decided that psychology was not for me. What I really wanted to do, I decided, was to be a writer.

"I wanted to write humor, like Art Buchwald and Erma Bombeck. So I moved to New York City in 1980 (where all starving writers go) and began cranking out 'humorous essays.'

"My essays weren't particularly funny, though I did publish some in a Staten Island newspaper, the Advance. My first check (for $15) is on the wall over my desk as I write this. I also had some of my photos published in the children's humor magazines Cracked and Crazy.

"I tried writing magazine articles, with little success. I wrote a few screenplays, but never sold them. I thought I had some good book ideas, but publishers weren't interested. I received hundreds of rejection letters. It was very frustrating, but I was very determined and persistent. I felt that I had some ability as a writer, but I didn't know where to direct it.

"In 1982 the video game Pac-Man was a huge craze, and I started a video games magazine called Video Games Player. This was the first (and only) job I ever had. The magazine sold pretty well, and two years later it was renamed Computer Games. Most importantly, I met my future wife Nina while working on the magazine. She is an illustrator, and we hired her to draw game screens. We got married in 1983.

"Whether I deserved it or not, I became known as a 'computer expert.' This was astonishing to me, because I knew next to nothing about computers (I still don't). But being the editor of Computer Games enabled me to write articles on the subject. I even wrote a newspaper column that was syndicated in The Philadelphia Inquirer, Miami Herald, and many other papers. I felt like a fraud the whole time.

"When Computer Games went out of business in 1985, I decided to take a gamble and become a full time freelance writer. At first I wrote about computers, but gradually I started tackling other topics. Eventually, my writing creeped into Esquire, Newsweek, Science Digest, Writer's Digest, Success, Psychology Today, New Woman, USA Today, and The Village Voice. I was gaining confidence as a writer, but I still hadn't found the type of writing I really wanted to do.

"In 1987, I decided to try my hand at writing about something I always loved-sports. I sold an article to Discover magazine about the science behind the spitball, scuffball, and corked bats. This led to my first adult baseball book (It Ain't Cheatin' If You Don't Get Caught). It sold pretty well, and I wrote several more baseball books for adults. None of them were big sellers, but it was a lot more fun than writing about computers.

"In 1992, when my son, Sam, was two years old, I decided to try writing for children. I wrote a few baseball books, then branched out to other sports--ice skating and gymnastics.

"Up until this point, all my books were non-fiction. I never thought I would be any good at creating a story, but in 1994, I decided to give fiction a try. Surprisingly, I sold the first novel I wrote (They Came From Centerfield). It was fun to write, kids loved it, and I discovered how incredibly rewarding it is to take a blank page and turn it into a WORLD.

"Around the same time, I started visiting schools, giving a program in which I use sports to get the students excited about reading and writing. This has been the most satisfying thing I've done in my career - when I visit a school I inspire the kids, the kids inspire me, and I even get paid for it!

"Finally, after fifteen years, I figured out what my career should be - writing fiction for kids and visiting schools. For the first time, I felt that I was doing something I was good at, something that was fun, creatively rewarding, and appreciated by an audience.

"Kids often tell me that my books make them laugh. This is funny to me, because writing humor was what I wanted to do when I got started back in 1980! It just took me a while to figure out the best way to do it.

"I am a member of SABR (Society for American Baseball Research), NWU (National Writers Union), and SCBWI (Society of Children's Book Writers and Illustrators). I live in Haddonfield, New Jersey with my wife Nina and our children Sam and Emma."

Dan Gutman is the author of many children's books, mostly about sports. In nonfiction, Dan's range extends from baseball (Baseball's Biggest Bloopers,Baseball's Greatest Games, World Series Classics) all the way to Gymnastics and Ice Skating (all Viking Children's Books).

He also writes sports fiction such as Honus & Me (Avon), The Million Dollar Shot (Hyperion)and They Came From Centerfield (Scholastic). Finally, Dan enjoys writing about other subjects besides sports, as he did in The Kid Who Ran For President (Scholastic), Virtually Perfect (Hyperion), and Taking Flight (Viking Children's Books).

When he's not writing a book, Dan is usually visiting a school, where he uses sports to get kids excited about reading and writing. Dan Gutman lives in Haddonfield, New Jersey with his wife Nina and their children Sam and Emma. If you visit Dan's web site, you'll find out a lot more about Dan, his books, and his school visits.