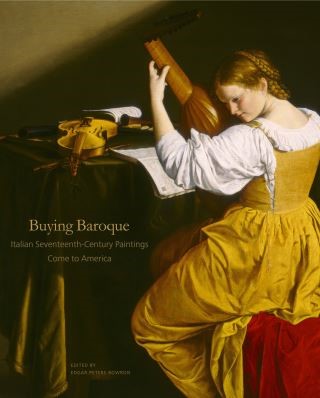 Although Americans have shown interest in Italian Baroque art since the eighteenth century—Thomas Jefferson bought copies of works by Salvator Rosa and Guido Reni for his art gallery at Monticello, and the seventeenth-century Bolognese school was admired by painters Benjamin West and John Singleton Copley—a widespread appetite for it only took hold in the early to mid-twentieth century. Buying Baroque tells this history through the personalities involved and the culture of collecting in the United States.

The distinguished contributors to this volume examine the dealers, auction houses, and commercial galleries that provided access to Baroque paintings, as well as the collectors, curators, and museum directors who acquired and shaped American perceptions about these works, including Charles Eliot Norton, John W. Ringling, A. Everett Austin Jr., and Samuel H. Kress. These essays explore aesthetic trends and influences to show why Americans developed an increasingly sophisticated taste for Baroque art between the late eighteenth century and the 1920s, and they trace the fervent peak of interest during the 1950s and 1960s.

A wide-ranging, in-depth look at the collecting of seventeenth- and eighteenth-century Italian paintings in America, this volume sheds new light on the cultural conditions that led collectors to value Baroque art and the significant effects of their efforts on America’s greatest museums and galleries.

Edgar Peters Bowron: Edgar Peters Bowron served as the Audrey Jones Beck Curator of European Art at the Museum of Fine Arts, Houston, from 1996 through 2014. Previously, he was senior curator of paintings at the National Gallery of Art in Washington, D.C., director of the Harvard University Art Museums, and director of the North Carolina Museum of Art. Now retired, he most recently published Pompeo Batoni: A Complete Catalogue of His Paintings.