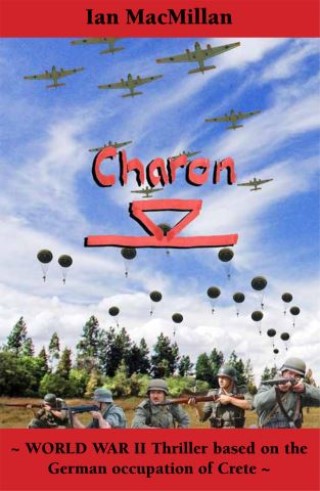 Charon is a thriller set in occupied Crete during WWII. It tells the story of heroism ‘against all the odds’ through the eyes of a young Greek boy who adopts the pseudonym Charon – the Greek mythological ferryman of the dead. Charon single-handedly, wages his own war of resistance against the German Nazi forces who have brutally occupied his island and turned it into an Axis fortress between Europe and North Africa. The opening tells of his assassination of the enemy’s commander. It then takes us back to the air-borne invasion of Crete in May 1941, the first and only large scale invasion of enemy held territory in history. Charon, a 17-year-old boy is mourning the loss of both his parents and only brother in Greece when the Nazis attacked. One morning he rushes outside at the sound of bombs and gunfire to see a sky black with falling paratroopers and gliders. When the Nazis then execute his grandfather leading to the death of his grandmother, his last surviving relative, Charon swears his campaign of vengeance which causes increasing terror to the occupying forces. The book is designed to appeal to any thriller lover or reader of war history.