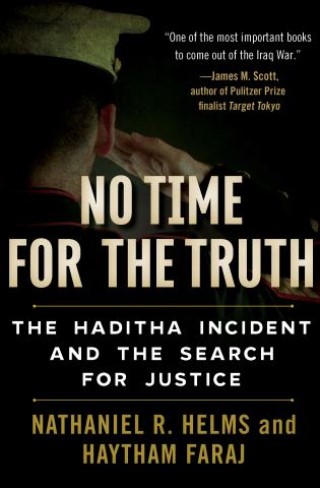 No Time for the Truth

The Haditha Incident and the Search for Justice

“An impassioned critique of the handling of the Haditha massacre by U.S. Marines” and America’s failure of justice in Iraq (Kirkus Reviews).

In 2005, twelve Marines stationed in Iraq were ambushed by Sunni Muslim insurgents in the city of Haditha. An IED (improvised explosive device) detonated under one their Humvees, leaving its passengers wounded or dead. In their merciless response, the surviving Marines killed twenty-four Iraqi citizens, including an old man and ten women and children. This horrific encounter was quickly dubbed the Haditha Massacre, drawing comparison to the Vietnam War’s infamous My Lai Massacre. Prompted by international condemnation, the Pentagon and Marine Corps initiated court-martial proceedings against the Marines involved, but justice was not their aim.

No Time for the Truth is the first book to show how the seven-year long investigation and trial that followed were no more than theater meant to quell outrage and salvage US-Iraq relations. Authors Nathaniel Helms and Haytham Faraj, who served as defense counsel, reveal how the Pentagon pressured prosecutors to protect the integrity of the Marine Corps by concealing the gruesome nature of killings and laying blame on a single staff sergeant.

This is a stunning account of one of the darkest moments in America’s invasion of Iraq, and a powerful statement that in war, “truth is the first casualty.”