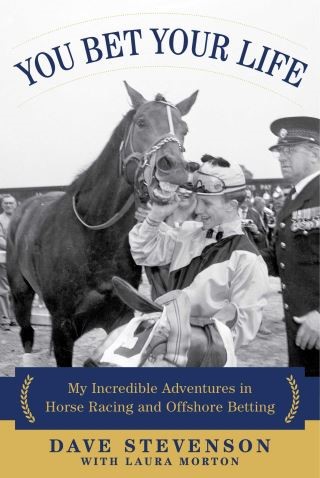 You Bet Your Life

My Incredible Adventures in Horse Racing and Offshore Betting

The rags-to-riches tale of one of the most remarkable figures in horse racing history.
Readers will be left breathless at the edge of their seats by the amazing stories in You Bet Your Life: My Incredible Adventures in Horse Racing and Offshore Betting, the story of celebrated jockey Dave Stevenson. A runaway barn hand who became a legendary champion and hero in his native Canada, Stevenson's life is incomparable in its color, scope, and excitement.
Throughout, You Bet Your Life is the ride of a lifetime. Its pages transport readers back in time to the golden era of American and Canadian horseracing greatness, traveling across North America and then around the world, all the while meeting an abundance of colorful characters: from legendary figures such as the Dowager Queen of England, Pablo Escobar, and champion thoroughbreds Secretariat and Seabiscuit, to charlatans and cheats, horses and owners, and jockeys and trainers that populated the underbelly and the pinnacle of the horseracing world.
Relayed in stunning detail and brimming with emotional episodes, Stevenson's memories bring readers to the front lines, so close to the action that you'll swear you can feel the force of the filly's kick, taste the grit of the racetrack, hear the roar of the crowd, and smell the alluring perfume of wealthy women.
Will Dave Stevenson's story enthrall and inspire you from its opening pages? You Bet Your Life it will.