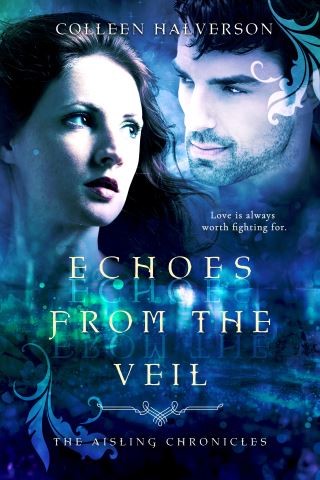 Echoes from the Veil

Aisling Elizabeth Tanner is now the leader of the Faerie rebellion. Facing the end of the world, she will have to find the strength to lead the Fae to victory against the threat they face, or risk losing everything, including Finn, whom she’s come to love more than life.

Warrior Finn O’Connell wants nothing more than to fight by Elizabeth’s side. But an ancient Celtic goddess threatens to take charge of his soul, and he will have to wage a war within himself to save the rebellion from disintegrating into chaos.

Betrayal leads them into the Fae Underworld, where Finn discovers his greatest sacrifice might be letting Elizabeth go—forever.

The Aisling Chronicles are best enjoyed in order.
Reading Order:
Book #1 Through The Veil
Book #2 Children of the Veil
Book #3 Echoes from the Veil

Colleen Halverson: As a child, Colleen Halverson used to play in the woods imagining worlds and telling stories to herself. Growing up on military bases, she found solace in her local library and later decided to make a living sharing the wonders of literature to poor, unsuspecting college freshman. After backpacking through Ireland and singing in a traditional Irish music band, she earned a PhD in English with a specialization in Irish literature. When she’s not making up stories or teaching, she can be found hiking the rolling hills of the Driftless area of Wisconsin with her husband and two children.