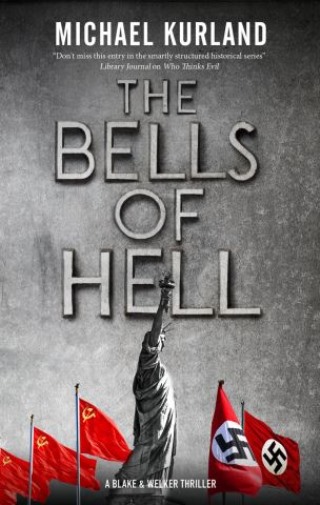 The Bells of Hell

Counter-intelligence agent Jacob Welker recruits a number of civilians to help foil a suspected terrorist attack by German spies in New York in 1938.

March, 1938. Otto Lehman arrives in New York on the S.S. Osthafen to be immediately confronted by two men with FBI badges . . . only, that isn’t his real name and the men aren’t with the FBI. The next day Lehman is found tied to a chair, beaten to death and naked, in an abandoned Brooklyn warehouse.

The sole witness to the crime, Andrew Blake, a homeless man struggling through the Great Depression, claims those responsible were speaking German. With the threat of the perpetrators being Nazis, President Roosevelt’s own covert counter-intelligence agent Jacob Welker is brought in to investigate.

Welker recruits Blake along with Lord Geoffrey Saboy, a British ‘cultural attache’, and his wife Lady Patricia, to help him to thwart a Nazi terrorist attack. But who exactly are the Nazis, what is their target and when will they strike?

Michael Kurland: A native of New York City now living in California’s Central Coast, Michael Kurland served four years in a branch of Army Intelligence, both in the United States and in Europe. He is the author of over 40 books, ranging from fantasy to mystery. He has been nominated for the Edgar award twice, for A Plague of Spies and The Infernal Device, the latter of which was also an American Book Award finalist.