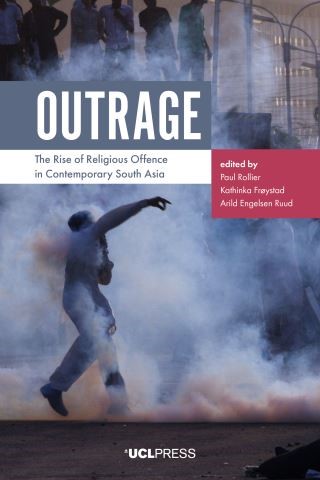 The Rise of Religious Offence in Contemporary South Asia

Whether spurred by religious images or academic history books, hardly a day goes by in South Asia without an incident or court case occurring as a result of hurt religious feelings. The sharp rise in blasphemy accusations over the past few decades calls for an investigation into why offence politics has become so pronounced, and why it is observable across religious and political differences.

Outrage: The Rise of Political Offence in Contemporary South Asia offers an interdisciplinary study of this growing trend. Bringing together researchers in Anthropology, Religious Studies, Languages, South Asia Studies and History, all with rich experience in the variegated ways in which religion and politics intersect in this region, the volume presents a fine-grained analysis that navigates and unpacks the religious sensitivities and political concerns under discussion.

Each chapter focuses on a recent case or context of alleged blasphemy or desecration in India, Pakistan, Bangladesh and Myanmar, collectively exploring common denominators across national and religious differences. Among the common features are the rapid introduction of social media and smartphones, the possible political gains of initiating blasphemy accusations, and the growing self-assertion of marginal communities. These features are turning South Asia into a veritable flash point for offence controversies in the world today, and will be of interest to researchers exploring the intersection of religion and politics in South Asia and beyond.

'... This book does a fine job of opening up such questions for reflection and further research [and] succeeds in breaking stereotypes that float around in popular culture but go unquestioned.'
Hindustan Times