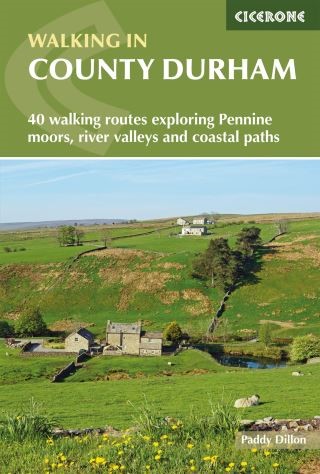 Guidebook of walking routes in County Durham. The 40 day walks, ranging between 5 and 24km in length, explore all corners of this varied county, encompassing wild moorland, rolling pastures, riverbanks and the low cliff coast. With such a range of possibilities, there are walks here for all abilities. They take in highlights such as Beamish, Durham City, Tan Hill and High Force. Featuring 1:50K OS mapping, step-by-step route descriptions, as well as information on the history of the region, the guidebook details everything you need to walk in the region. The county lies between two mighty rivers - the Tyne and the Tees - and between the high Pennines in the west and the North Sea to the east. Into this small space is crammed a wide variety of landscape and two centuries of turbulent history, waiting to be explored on foot.

Paddy Dillon: Paddy Dillon is a prolific walker and guidebook writer, with 100 guidebooks to his name and contributions to 40 other titles. He has written extensively for many different outdoor publications and has appeared on radio and television. Paddy uses a tablet computer to write his route descriptions while walking. His descriptions are therefore precise, having been written at the very point at which the reader uses them. Paddy is an indefatigable long-distance walker who has walked all of Britain's National Trails and several major European trails. He lives on the fringes of the Lake District and has walked, and written about walking, in every county throughout the British Isles. He has led guided walks and walked throughout Europe, as well as in Nepal, Tibet, Korea, Africa and the Rocky Mountains of Canada and the US. Paddy is a member of the Outdoor Writers and Photographers Guild.