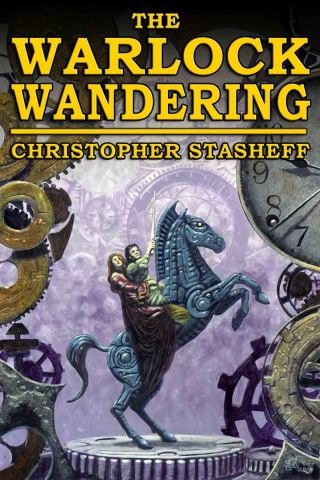 LOST IN TIME, FAR FROM HOME, SURROUNDED BY ENEMIES. Five hundred years from their own time and place on the magical planet Gramarye, Rod and Gwen Gallowglass are held captive on another planet - a world where purple-skinned, fur-kilted men challenge them in primitive battle. Lost within time and space, Rod and Gwen must fight for their survival, freedom, and to return home.

Christopher Stasheff: Christopher Stasheff teacher, thespian, techie, and author of science fiction & fantasy novels. One of the pioneers of "science fantasy," his career spans four decades, 44 novels (including translations into Czech, German, Italian, Russian, and Japanese), 29 short stories, and seven 7 anthologies. His novels are famous for their humor (and bad puns), exploration of comparative political systems, and philosophical undertones. He has always had difficulty distinguishing fantasy from reality and has tried to compensate by teaching college. When teaching proved too real, he gave it up in favor of writing full time. He tends to pre-script his life, but can't understand why other people never get their lines right. This causes a fair amount of misunderstanding with his wife and four children. He writes novels because it's the only way he can be the director, the designer, and all the actors too.