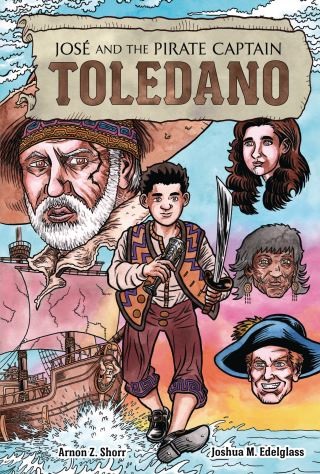 José and the Pirate Captain Toledano

Set in the shadows of the Spanish Inquisition, this is the coming-of-age story of José Alfaro, a young refugee who forms a powerful bond with the mysterious Pirate Captain Toledano. It’s also a dynamic pirate adventure on the high seas, with hand-to-hand combat and ship-to-ship action, and the powerful story of a dark time in history when people took different paths to survive.

José Alfaro is a cocky, rambunctious teen in the 16th-century colony of Santo Domingo, pulling pranks and dodging the authorities. One day, José’s mischief lands him in serious trouble.

Hoping for a fresh start, he stows away on the Laqish, not knowing that it’s a pirate ship. From his hiding place, he watches the pirates divide their loot and plan their attacks on long days at sea. He also takes note of the respect they have for their captain, the intimidating Toledano.

But the captain has a secret—like José, he is a Jew. For him, piracy is not about the gold; it has a different purpose.

Under the tutelage of the ship’s quartermaster, José learns the intricacies of pirate life. But when he can, the captain finds ways to pull José away from the crew, to teach him about his ancestors.

José finds his community. His place. His voice. His purpose.

This is a pirate story, but also a story of survival—a story of a young man’s deep need to know who he is, where he comes from, and where he’s going.

Arnon Z. Shorr: Arnon Z. Shorr, a filmmaker and screenwriter, loves telling stories. Half-Sepharadi / half-Ashkenazi, a Hebrew speaker in America, a Jewish private-school kid in a mostly non-Jewish suburb, whenever he’d set foot in one world, his other foot would betray him as different. That’s why he tells stories that embrace the peculiar and the other. For more about Arnon, visit www.arnonshorr.com. Formerly of Los Angeles, he lives in Boston.