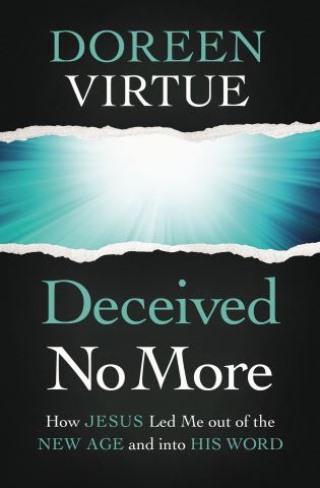 In this brilliant, utterly captivating memoir, Doreen Virtue chronicles her journey in discovering everything she believed in was a lie. She poignantly shares the price she’s paid for following Jesus.

New Age teachings are based on concepts that sound almost irresistible. But as Doreen discovered, they come with a hidden price: your eternal destiny. Here is a riveting, personal confessional of how a former false prophet learned to trust God after nearly wasting a lifetime being independent and willful—trying to predict and control the future—and how Jesus saved her soul from deception and opened her eyes to His truth.

Deceived No More can help you learn how to discern dangerous teachings so you can detect and avoid deception. Topics include:

Raised in Christian Science, Doreen Virtue was formerly the top-selling New Age author at the world’s largest New Age publisher, until Jesus opened her eyes to the gospel. She got baptized for the first time, began spreading the gospel message, and denouncing the New Age. After getting fired from her New Age publisher and losing most of her friends, some of her family members, enduring cruel slander and spiritual warfare, and losing her home, Doreen and her husband, Michael, began rebuilding their lives on the solid foundation of Jesus. They learned how to trust in God, instead of trying to predict or control the future. Today, they live in the Pacific Northwest where they attend a biblically solid church and Doreen attends seminary studying biblical theology so that she won’t be deceived again.