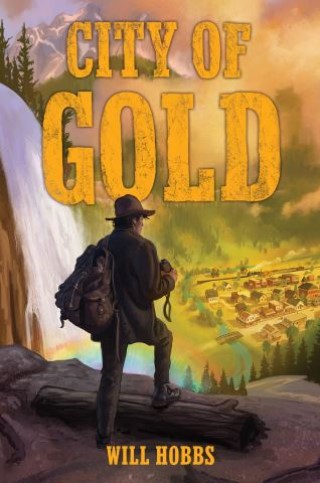 Rich in adventure, history, and humor, an odyssey set in the twilight of the Wild West spun by Will Hobbs

Weeks after arriving in Colorado to start a new farm, the Hollowell family is looking at disaster when fifteen-year-old Owen witnesses the theft of their mules. Learning that Hercules and Peaches will likely be sold to the mines, Owen sets out to track the rustler over the mountains. It’s all Ma can do to hold back little brother Till, who’s more than a handful.

The outlaw’s trail leads to Telluride, the turbulent “City of Gold.” Owen gets help from a resourceful girl named Molly and dubious assistance from Till, who shows up on the train from Durango.

Telluride’s notorious marshal finally takes an interest when he identifies the rustler as one of Butch Cassidy’s Wild Bunch. The lawman leads Owen and Till on horseback into the canyon country and all the way to Robbers Roost.

For readers who love adventure and humor, Will Hobbs delivers a stirring tale of two brothers who risk it all to recover their mules and secure their future.

Will Hobbs is the award-winning author of nineteen novels, including Far North, Crossing the Wire, and Take Me to the River.

Never Say Die began with the author's eleven-day raft trip in 2003 down the Firth River on the north slope of Canada's Yukon Territory. Ever since, Will has been closely following what scientists and Native hunters are reporting about climate change in the Arctic. When the first grolar bear turned up in the Canadian Arctic, he began to imagine one in a story set on the Firth River.

A graduate of Stanford University, Will lives with his wife, Jean, in Durango, Colorado.