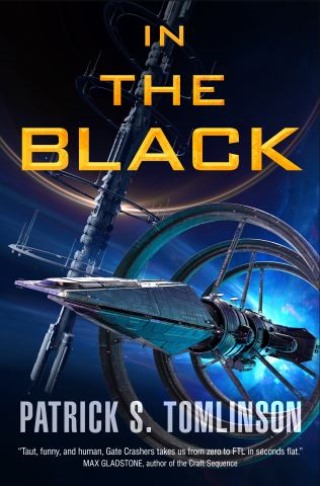 It's Hunt for the Red October in Space, with this brand new military science fiction novel from Patrick S. Tomlinson, In the Black

In a demilitarized zone on the border of human space, long range spy satellites are mysteriously going quiet, and no one knows why. Captain Susan Kamala and her crew are dispatched to figure out what's going on and solve the problem.

That problem, however, is a mysterious, bleeding edge alien ship that no human vessel could hope to match in open conflict. But, it's not spoiling for a fight.

Now, the Captain and her Crew must figure out how to navigate a complicated game of diplomacy, balancing the needs of their corporate overlords, and the honest desire for a lasting peace between the two races, all without letting a long standing cold war turn hot.

Patrick S. Tomlinson: Patrick S. Tomlinson is a man of many hats. In addition to writing Sci-Fi novels (Gate Crashers) and shorts, he prowls theaters, clubs, and bars throughout the midwest performing as a stand-up comedian. Between gigs, cons, and rewrites, he works as a pundit and frequent political contributor, with columns appearing in publications such as The Hill and The New York Times. In the little downtime remaining, Patrick enjoys hobbies such as motorcycling, model-building, and shooting. He lives in Milwaukee with his wife, two cats, a bearded dragon, and a 2008 Bullitt Edition Mustang named Susan.