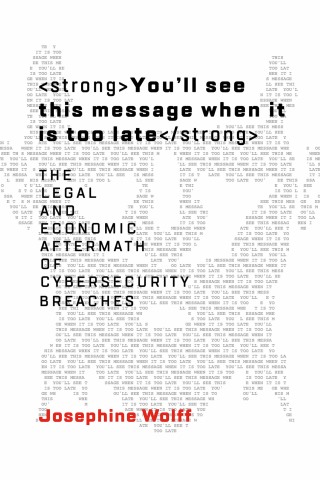 You'll See This Message When It Is Too Late

The Legal and Economic Aftermath of Cybersecurity Breaches

What we can learn from the aftermath of cybersecurity breaches and how we can do a better job protecting online data.

Cybersecurity incidents make the news with startling regularity. Each breach—the theft of 145.5 million Americans' information from Equifax, for example, or the Russian government's theft of National Security Agency documents, or the Sony Pictures data dump—makes headlines, inspires panic, instigates lawsuits, and is then forgotten. The cycle of alarm and amnesia continues with the next attack, and the one after that. In this book, cybersecurity expert Josephine Wolff argues that we shouldn't forget about these incidents, we should investigate their trajectory, from technology flaws to reparations for harm done to their impact on future security measures. We can learn valuable lessons in the aftermath of cybersecurity breaches.

Wolff describes a series of significant cybersecurity incidents between 2005 and 2015, mapping the entire life cycle of each breach in order to identify opportunities for defensive intervention. She outlines three types of motives underlying these attacks—financial gain, espionage, and public humiliation of the victims—that have remained consistent through a decade of cyberattacks, offers examples of each, and analyzes the emergence of different attack patterns. The enormous TJX breach in 2006, for instance, set the pattern for a series of payment card fraud incidents that led to identity fraud and extortion; the Chinese army conducted cyberespionage campaigns directed at U.S.-based companies from 2006 to 2014, sparking debate about the distinction between economic and political espionage; and the 2014 breach of the Ashley Madison website was aimed at reputations rather than bank accounts.

Josephine Wolff: Josephine Wolff is Assistant Professor of Cybersecurity Policy at the Fletcher School of Law and Diplomacy at Tufts University. Her writing on cybersecurity has appeared in Slate, the New York Times, the Washington Post, the Atlantic, and Wired.