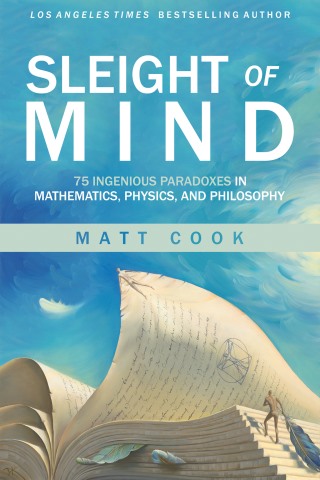 Exploring more than seventy-five well-known paradoxes in mathematics, philosophy, physics, and the social sciences showing how reason and logic can dispel the illusion of contradiction.

Paradox is a sophisticated kind of magic trick. A magician's purpose is to create the appearance of impossibility, to pull a rabbit from an empty hat. Yet paradox doesn't require tangibles, like rabbits or hats. Paradox works in the abstract, with words and concepts and symbols, to create the illusion of contradiction. There are no contradictions in reality, but there can appear to be. In Sleight of Mind, Matt Cook and a few collaborators dive deeply into more than 75 paradoxes in mathematics, physics, philosophy, and the social sciences. As each paradox is discussed and resolved, Cook helps readers discover the meaning of knowledge and the proper formation of concepts—and how reason can dispel the illusion of contradiction.

The journey begins with “a most ingenious paradox” from Gilbert and Sullivan's Pirates of Penzance. Readers will then travel from Ancient Greece to cutting-edge laboratories, encounter infinity and its different sizes, and discover mathematical impossibilities inherent in elections. They will tackle conundrums in probability, induction, geometry, and game theory; perform “supertasks”; build apparent perpetual motion machines; meet twins living in different millennia; explore the strange quantum world—and much more.

Matt Cook: Matt Cook, PhD, is an economist, bestselling author, and magician. Among his works are the thriller novel Sabotage and entrepreneurial success book The Startup Star, which he wrote at Stanford University. Trained at the world-famous Magic Castle, he has performed across the globe and enjoys infusing talks and lectures with sleight of hand. He cofounded U.S. Common Sense, the country's premiere government data and transparency organization. For his support of the military, he was honored by President George W. Bush with the Call to Service Award. He is an accomplished pianist and musical composer, has executive produced for film, and earned his doctorate at the University of Pennsylvania.