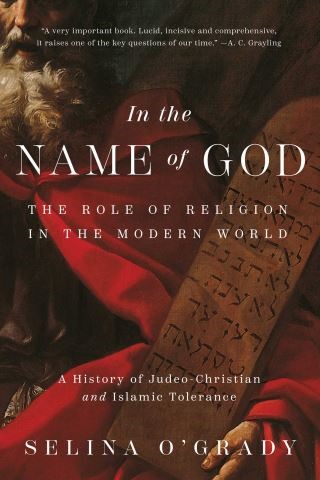 In the Name of God

The Role of Religion in the Modern World: A History of Judeo-Christian and Islamic Tolerance

A groundbreaking book on the history of religious tolerance and intolerance that offers an essential narrative to understanding Islam and the West today.

Never has this book been more timely. Religious intolerance, the resurgence of fundamentalism, hate crimes, repressive laws, and mass shootings are pervasive in today’s world. Selina O’Grady asks how and why our societies came to be as tolerant or intolerant as they are; whether tolerance can be expected to heal today’s festering wound between Islam and the post-Christian West; or whether something deeper than tolerance is needed.

From Umar, the seventh century Islamic caliph who led what became the greatest empire the world has ever known, to King John (of Magna Carta fame) who almost converted to Islam; from Ibn Abd al-Wahhab, who created the religious-military alliance with the House of Saud that still survives today, to the bloody Thirty Years’ War that cured Europe of murderous intra-Christian violence (but probably killed God in the process), Selina O’Grady takes the reader through the intertwined histories of the Muslim, Christian, and Jewish faiths.

In the Name of God is an original and thought-provoking history of monotheistic religions and their ever-shifting relationship with each other.

Selina O'Grady: Selina O'Grady was a documentary film producer at BBC Television for many years. She is the author of And Man Created God and has written for the Guardian, and the Literary Review in Britain. She lives in London.