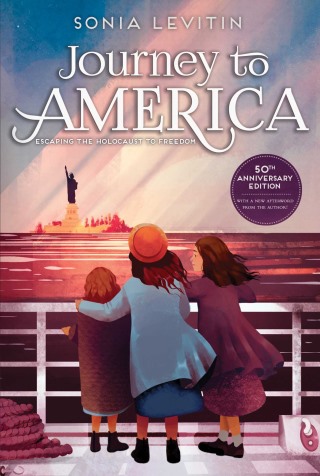 In 1938, Lisa Platt and her family know something dangerous is happening in Germany. Lately, there have been more and more restrictions for Jews: yellow stars they have to wear, schools they cannot attend, things they are forbidden to do. When their neighbors are arrested for petty reasons, the Platts realize they have to escape.

Forbidden to bring money or possessions out of the country, Lisa’s father secretly leaves for America, planning to work until he can send for them. But when conditions in Germany worsen, Lisa, her mother, and her sisters flee to Switzerland to wait, surviving on what little they have in a continent hurtling toward war.

Inspired by Sonia Levitin’s own experience of fleeing Germany as a child, this moving novel chronicles one family’s bravery in the face of aggression and apathy.

Sonia Levitin: Sonia Levitin, like Lisa Platt, escaped from Germany in the late 1930’s. Among her acclaimed books for young readers are The Mark of Conte and The Return.