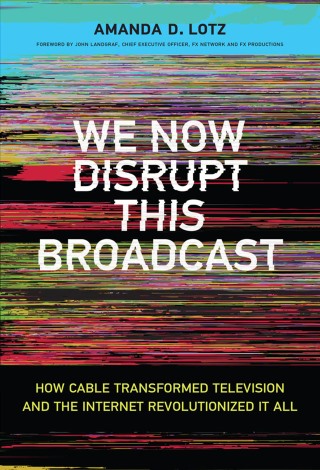 We Now Disrupt This Broadcast

How Cable Transformed Television and the Internet Revolutionized It All

The collision of new technologies, changing business strategies, and innovative storytelling that produced a new golden age of TV.

Cable television channels were once the backwater of American television, programming recent and not-so-recent movies and reruns of network shows. Then came La Femme Nikita, OZ, The Sopranos, Mad Men, Game of Thrones, and The Walking Dead. And then, just as “prestige cable” became a category, came House of Cards and Netflix, Hulu, Amazon Video, and other Internet distributors of television content. What happened? In We Now Disrupt This Broadcast, Amanda Lotz chronicles the collision of new technologies, changing business strategies, and innovative storytelling that produced an era termed “peak TV.”

Lotz explains that changes in the business of television expanded the creative possibilities of television. She describes the costly infrastructure rebuilding undertaken by cable service providers in the late 1990s and the struggles of cable channels to produce (and pay for) original, scripted programming in order to stand out from the competition. These new programs defied television conventions and made viewers adjust their expectations of what television could be. Le Femme Nikita offered cable's first antihero, Mad Men cost more than advertisers paid, The Walking Dead became the first mass cable hit, and Game of Thrones was the first global television blockbuster. Internet streaming didn't kill cable, Lotz tells us. Rather, it revolutionized how we watch television. Cable and network television quickly established their own streaming portals. Meanwhile, cable service providers had quietly transformed themselves into Internet providers, able to profit from both prestige cable and streaming services. Far from being dead, television continues to transform.

Amanda D. Lotz: Amanda D. Lotz is Professor of Media Studies at the University of Michigan and a Fellow at the Peabody Media Center. She is the author of The Television Will Be Revolutionized, the coauthor of Understanding Media Industries and Television Studies, and the editor of Beyond Prime Time: Programming in the Post-Network Era.