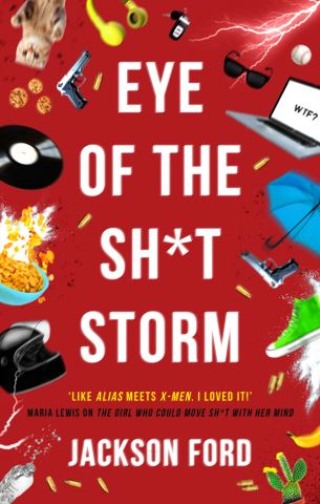 Eye of the Sh*t Storm

'AN UN-PUT-DOWN-ABLE, ACTION-PACKED ADVENTURE THAT PACKS AN EMOTIONAL PUNCH' Kirkus

Full of imagination, wit and random sh*t flying through the air, this insane new Frost Files adventure will blow your tiny mind.

Teagan Frost might be getting better at moving sh*t with her mind - but her job working as a telekinetic government operative only ever seems to get harder. That's not even talking about her car-crash of a love life . . .

And things are about to get even tougher. No sooner has Teagan chased off one psychotic kid hell-bent on trashing the whole West Coast, but now she has to contend with another supernatural being who can harness devastating electrical power. And if Teagan can't stop him, the whole of Los Angeles will be facing the sh*tstorm of the century . . .

'A non-stop adrenaline high. Fans of the series will be eagerly awaiting the further adventures of Teagan and her cohorts, and newcomers will quickly fall in love with Jackson's quirky cast of characters, imaginative storytelling, and wry wit' Library Journal

Praise for the Frost Files series:

'Proceeds at breakneck speed through almost 500 pages of madcap adventure'Guardian

'Fast-paced and a lot of fun to read . . . a modern action movie that just happens to be in book form' The Fantasy Inn

'A drunken back-alley brawler of a book' Robert Brockway, author of The Unnoticeables

'Ford's breakneck pace keeps the tension high, and the thrills coming the whole way through' BookPage


The Frost Files novels:
The Girl Who Could Move Sh*t With Her Mind
Random Sh*t Flying Through the Air
Eye of the Sh*t Storm

Jackson Ford: Jackson Ford is a pseudonym for Rob Boffard, a South African writer currently living in Vancouver. He is the author of the critically acclaimed Frost Files series, about a government operative with telekinetic powers. He has released four science fiction novels under the name Rob Boffard, and was previously a journalist for over a decade, writing articles for publications and sites including The Guardian, the BBC, Wired Magazine and io9.