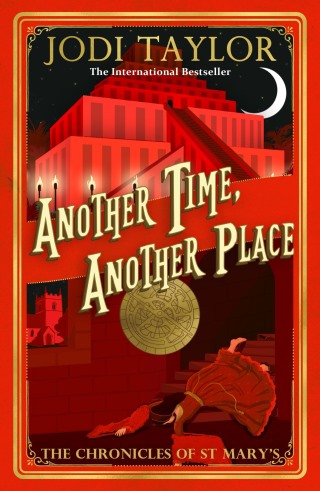 Another Time, Another Place

'Jodi Taylor is quite simply the Queen of Time. Her books are a swashbuckling joyride through History' C. K. MCDONNELL

BOOK 12 IN THE INTERNATIONALLY BESTSELLING CHRONICLES OF ST MARY'S SERIES

It's long been known that if a thing can go wrong, it will. With knobs on, usually. Disasters start to pile up. A new colleague with no respect for the past and a great deal to prove. Historians lost in time. And - worst of all - Rosie Lee on her very first jump. Then there's the small matter of Max's dishonourable discharge.

From Tudor England to the Tower of Babel - it's all going horribly wrong.

Jobless and homeless, Max receives an offer she can't refuse. Another time, another place. A refuge, perhaps.

She's got that wrong, too.

'Once in a while, I discover an author who changes everything... Jodi Taylor and her protagonista Madeleine "Max" Maxwell have seduced me'

'Addictive. I wish St Mary's was real and I was a part of it'

'Jodi Taylor has an imagination that gets me completely hooked'

Jodi Taylor is the internationally bestselling author of the Chronicles of St Mary's series, the story of a bunch of disaster prone individuals who investigate major historical events in contemporary time. Do NOT call it time travel! She is also the author of the Time Police series - a St Mary's spinoff and gateway into the world of an all-powerful, international organisation who are NOTHING like St Mary's. Except, when they are.

Alongside these, Jodi is known for her gripping supernatural thrillers featuring Elizabeth Cage together with the enchanting Frogmorton Farm series - a fairy story for adults.

Born in Bristol and now living in Gloucester (facts both cities vigorously deny), she spent many years with her head somewhere else, much to the dismay of family, teachers and employers, before finally deciding to put all that daydreaming to good use and write a novel. Nearly twenty books later, she still has no idea what she wants to do when she grows up.