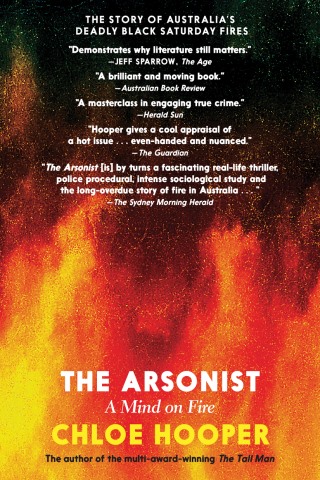 A Mind on Fire

The true story of one of the most devastating wildfires in Australian history and the search for the man who started it.

On the scorching February day in 2009, a man lit two fires in the Australian state of Victoria, then sat on the roof of his house to watch the inferno. What came to be known as the Black Saturday bushfires killed 173 people and injured hundreds more, making them among the deadliest and most destructive wildfires in Australian history. As communities reeling from unspeakable loss demanded answers, detectives scrambled to piece together what really happened. They soon began to suspect the fires had been deliverately set by an arsonist.

The Arsonist takes readers on the hunt for this man, and inside the puzzle of his mind. But this book is also the story of fire in the Anthropocene. The command of fire has defined and sustained us as a species, and now, as climate change normalizes devastating wildfires worldwide, we must contend with the forces of inequality, and desperate yearning for power, that can lead to such destruction.

Written with Chloe Hooper’s trademark lyric detail and nuance, The Arsonist is a reminder that in the age of fire, all of us are gatekeepers.

Chloe Hooper: Chloe Hooper's The Tall Man: Death and Life on Palm Island (2008) won the Victorian, New South Wales, West Australian and Queensland Premier's Literary Awards, as well as the John Button Prize for Political Writing, and a Ned Kelly Award for crime writing. She is also the author of two novels, A Child's Book of True Crime and The Engagement.