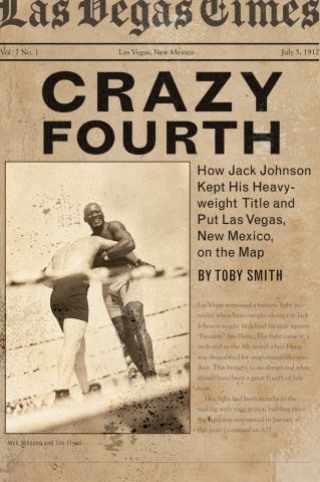 How Jack Johnson Kept His Heavyweight Title and Put Las Vegas, New Mexico, on the Map

In 1912 boxing was as popular a spectator sport in the United States as baseball, if not more so. It was also rife with corruption and surrounded by gambling, drinking, and prostitution, so much so that many cities and states passed laws to control it. But not in New Mexico. It was the perfect venue for one of the biggest, loudest, most rambunctious heavyweight championship bouts ever seen. In Crazy Fourth Toby Smith tells the story of how the African American boxer Jack Johnson—the bombastic and larger-than-life reigning world heavyweight champion—met Jim Flynn on the fourth of July in Las Vegas, New Mexico. The civic boosters, bursting with pride in their town, raised a hundred thousand dollars for the fight, pushing events like the sinking of the Titanic to the back pages of every newspaper. In the end, once the dust finally settled on the whole unseemly spectacle, Las Vegas would spend the next generation making good on its losses.

Toby Smith: Toby Smith is a former sportswriter for the Albuquerque Journal. He is the author of nine previous books, including Kid Blackie: Jack Dempsey’s Colorado Days and Bush League Boys: The Postwar Legends of Baseball in the American Southwest (UNM Press). He lives in Albuquerque, New Mexico.