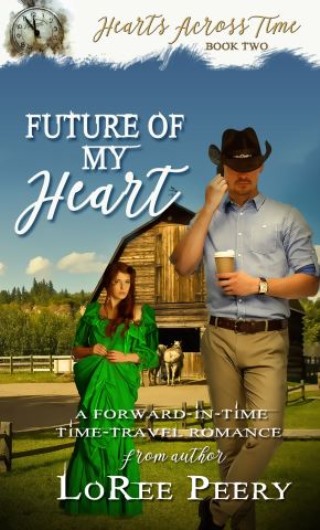 Future of My Heart

Nolan Riley can't believe his eyes when woman in historical dress lands on top of his lighting van while they're filming a Western. She claims she's from 1891. He knows he shouldn't believe her. He's stayed away from women after a disastrous relationship, but something about the lost look in Phoebe's eyes makes him feel protective, despite his distrust of women and Phoebe's unbelievable claim. Against his better judgment, he takes Phoebe home and gets her a job on the movie set.

As they explore their relationship, they discover that old wrongs need to be righted before they can move on. Phoebe's fledgling faith demands she go back to 1891 Nebraska to ask forgiveness from her family and obligations she left behind. Nolan has to deal with his inability to trust a woman. Separated by time, both are uncertain of their lives, but they throw themselves upon God's mercy.

But love transcends time. Is their love is strong enough to secure a future together?

LoRee Peery: Christian romance author LoRee Peery writes to feel alive, as a way of contributing, and to pass forward the hope of rescue from sin. She writes of redeeming grace with a sense of place. LoRee clings to I John 5:4 and prays her family sees that faith. She has authored the Frivolities Series and other e-books. Her desire for readers, the same as for her characters, is to discover where they fit in this life journey to best work out the Lord’s life plan. She is who she is by the grace of God: Christian, country girl, wife, mother, grandmother, sister, friend, and author. She’s been a reader since before kindergarten.