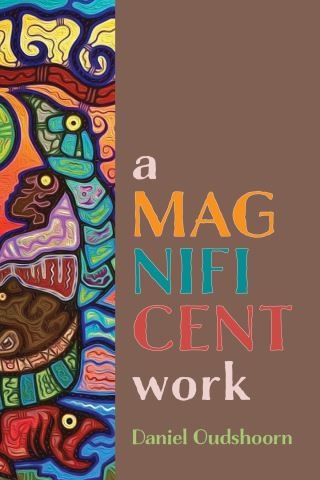 A Magnificent Work is an autobiographical exploration of the interconnectedness of toxic masculinity, White supremacy, and settler colonialism within the context of Canadian-occupied territories. It is a work of "documentary fiction" (to use the term of W. G. Sebald) or "autotheory" (as proposed by Maggie Nelson). Oudshoorn moves from relating his personal experiences as both a son and a father to exploring the ways in which similar events have played out on a much larger scale within the Canadian occupation. Special attention is given to the history of the Mohawk Institute, Canada's oldest and longest-running "Indian Residential School." Thus, although an Anglican bishop once described the Mohawk Institute as "a magnificent work," Oudshoorn argues that the truly magnificent work that awaits people like him--notably, cishet male settlers of Christian and European descent--is the process of embodying a gentle masculinity, recovering a sense of one's proper place of connectedness within a network of relationships with varying degrees of responsibility and accountability, and striving towards decolonization.

Daniel Oudshoorn: Daniel Oudshoorn is a father, lover, fighter, friend, and failure. He has spent more than twenty years actively pursuing life and mutually liberating solidarity in the company of the oppressed, abandoned, dispossessed, colonized, and left for dead.