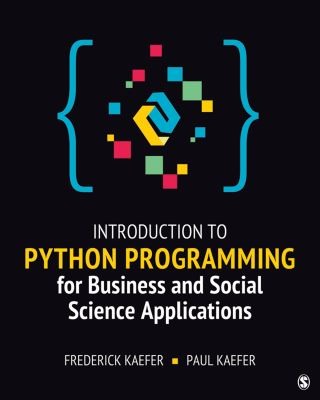 Introduction to Python Programming for Business and Social Science Applications

Would you like to gather big datasets, analyze them, and visualize the results, all in one program? If this describes you, then Introduction to Python Programming for Business and Social Science Applications is the book for you. Authors Frederick Kaefer and Paul Kaefer walk you through each step of the Python package installation and analysis process, with frequent exercises throughout so you can immediately try out the functions you’ve learned. Written in straightforward language for those with no programming background, this book will teach you how to use Python for your research and data analysis. Instead of teaching you the principles and practices of programming as a whole, this application-oriented text focuses on only what you need to know to research and answer social science questions. The text features two types of examples, one set from the General Social Survey and one set from a large taxi trip dataset from a major metropolitan area, to help readers understand the possibilities of working with Python. Chapters on installing and working within a programming environment, basic skills, and necessary commands will get you up and running quickly, while chapters on programming logic, data input and output, and data frames help you establish the basic framework for conducting analyses. Further chapters on web scraping, statistical analysis, machine learning, and data visualization help you apply your skills to your research. More advanced information on developing graphical user interfaces (GUIs) help you create functional data products using Python to inform general users of data who don’t work within Python.

Frederick Kaefer is an Associate Professor of Information Systems at the Loyola University Chicago Quinlan School of Business.  After completing a Bachelors degree in Mathematics and Computer Science, he worked as a mainframe programmer for several years before earning an MBA with concentrations in Finance and Information Systems and a PhD in Management Information Systems.  Professor Kaefer has taught computer programming and other information systems courses to business students for over 25 years.  In addition to his interest in the Python programming language, Professor Kaefer has taught courses including Data Structures using C, and VBA Programming in MS Office.

Paul Kaefer works as Senior Analytics Engineer at Carrot Health and has instructed two data analytics & visualization bootcamps through Trilogy Education Services. He previously worked for UnitedHealthcare as a Data Scientist. After earning a Bachelor’s degree in Computer Engineering, he earned a Master's degree in Computational Sciences while leading the Data Analysis Team for the GasDay project, a research lab at Marquette University that works with energy utilities around the United States to forecast natural gas demand.  In addition to his interest in the Python programming language, Paul has certifications in the SAS programming and R programming languages, and is building experience using Tableau.