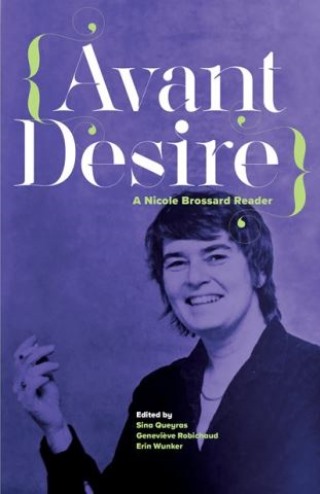 The definitive survey of an essential feminist poet.

In June 2019, Nicole Brossard was awarded the Lifetime Recognition Award from the Griffin Poetry Trust. Rarely has a prize been so richly deserved. For five decades she has writing ground-breaking poetry, fiction, and criticism in French that has always been steadfastly and unashamedly feminist and lesbian.

Avant Desire moves through Brossard’s body of work with a playful attentiveness to its ongoing lines of inquiry. Like her work, this reader moves beyond conventional textual material to include ephemera, interviews, marginalia, lectures, and more. Just as Brossard foregrounds collaboration, this book includes new translations alongside canonical ones and intertextual and responsive work from a variety of artist translators at various stages of their careers.

Through their selections, the editors trace Brossard’s fusion of lesbian feminist desire with innovation, experimentation, and activism, emphasizing the more overtly political nature of her early work and its transition into performative thinking.

Devotees of Brossard will be invigorated by the range of previously unavailable materials included here, while new readings will find a thread of inquiry that is more than a mere introduction to her complex body of work. Avant Desire situates Brossard’s thinking across her oeuvre as that of a writer whose sights are always cast toward the horizon.

Two-time Governor General’s Award winner for her poetry, Nicole Brossard has published more than thirty books of poetry, fiction, and essays since 1965. She has co-founded and co-directed the literary magazine La Barre du Jour (1965-1975), co-directed the film Some American Feminists (1976), and co-edited the acclaimed Anthologie de la poésie des femmes au Québec (1991 and 2003). Her work has been widely translated into English and Spanish and is also available in many other languages. Nicole has won numerous awards, including winning the Trois-Rivières International Poetry Festival Grand Prix Québecor in 1989 and 1999, the Prix Athanase-David in 1991, and the the first Violet Prize awarded by the Blue Metropolis Festival in 2018. One of her novels, Mauve Desert, has been presented as a multidisciplinary creation in 2018 and is slated for an opera adaptation in 2020-21. She is an officer of the Order of Canada, chevalière of the National Order of Quebec, and a member of l’Académie des lettres du Québec. Nicole currently lives in Montreal.