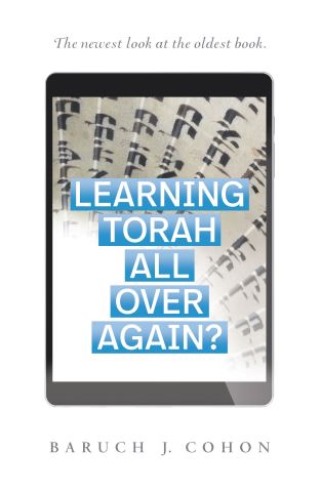 Learning Torah All over Again?

The Newest Look at the Oldest Book

"These are things that have no measure," says the Mishna. What are they? Simple actions like honoring parents, doing acts of kindness, visiting the sick, bringing home the bride burying the dead, making peace between neighbors, etc. And rated equal to the sum of these immeasurable actions is learning Torah. Hopefully, the Torah's ancient narratives, laws and principles will help us master those immeasurable qualities ,those great Mitzvos, in our lives today. Welcome to Learning Torah - all over again?

Baruch J. Cohon: The author, Baruch Joseph Cohon, was born in Chicago and grew up in Cincinnati, the son of Rabbi Samuel S. Cohon, a prominent Jewish scholar whose books include "Judaism a Way of Life", "Essays in Jewish Theology", and "Faithfully Yours," a posthumous publication which his son edited. His mother was A. Irma Cohon, an accomplished teacher and publisher. One very early interest he had was music. He sang both in Hebrew and English at an early age, mastering some cantorial music, and he played piano -- a skill he used as a teenager to join dance combos. He served in the World War II Navy, and on returning to civilian life he entered college. Attracted to show business, he moved to California and earned a BA in Motion Pictures at UCLA, where he met his late wife Claire who stage-managed a play he acted in. Officiating as a cantor and active in Community Center work, he edited the book "Jewish Existence in an Open Society" for the Los Angeles Jewish Centers Association. He also spent some 10 years writing and producing TV films in Hollywood. Resuming synagogue work in the '60's, he enhanced his studies and received Orthodox ordination. His most recent book is "Making Sense of My Century," published in 2008.