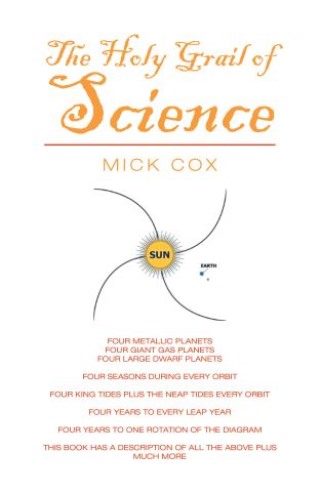 The Holy Grail of Science

From the Diagram the Author describes how it is possible that we have Four Metallic Planets, Four Giant Gas Planets and early science discovered just Four Dwarfs which are the largest today out of a total of eleven. The book also describes ‘How the Four King Tides are generated accompanied by the Neap Tides. The Author describes another multitude of events in our Solar System and throughout our Galaxy, the Milky Way. In the last chapter the author talks about the events that lead to his discovery of all of the above plus a spin on his involvement in Spiritualism and Mediumship.

Mick Cox: The Author was once a tradesman who worked with his hands. His hands-on skills were gifted and Licensed in Six Different Major Technical Trades including Electrical, Telephones, Gas Fitting, Air-conditioning, Plumbing and Pest Control with the intention of reporting in “Pre-Purchase House Inspections”. Instead he turned his writing skills into this book, where he applied simple Magnetics from the Electrical Trade to the Four Magnetic Lines which span from the Sun. They say that ‘a picture can paint a thousand words’ and that is exactly what Mick Cox has done with this simple diagram of our Sun when he discovered in his book what he calls “The Master Key”. Mick Cox has spent 10years overcoming his Dyslexia to write a logical description of the Solar System.