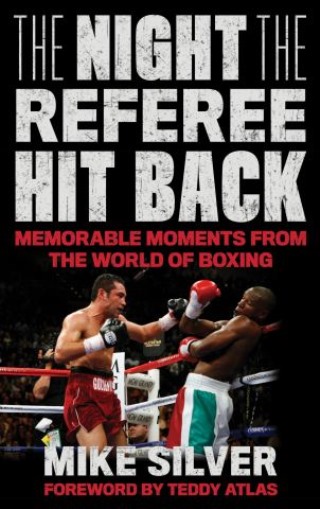 The Night the Referee Hit Back

Memorable Moments from the World of Boxing

This collection of award-winning boxing journalist Mike Silver’s best articles from the past 40 years features a colorful mix of hard-hitting exposes and light-hearted stories that include legendary boxers such as Sugar Ray Robinson, Rocky Marciano, Muhammad Ali, Oscar De La Hoya, and more.

The boxing world has witnessed some spectacular and iconic moments, from the “Thrilla in Manila” to the last encounter between Sugar Ray Robinson and Jake LaMotta. In The Night the Referee Hit Back: Memorable Moments from the World of Boxing, award-winning boxing journalist Mike Silver looks back at some of boxing’s most legendary fights, talks with Hall of Famers Archie Moore, Carlos Ortiz, Emile Griffith and Curtis Cokes, and analyzes the changes that have taken place in boxing since the Golden Age. This collection, drawn from the author’s best articles from the past 40 years, are a colorful mix of hard-hitting exposes, interviews, and light-hearted stories featuring boxers such as Floyd Mayweather Jr., Joe Frazier, Oscar De La Hoya, and Muhammad Ali.

Mike Silver captures the essence, charisma, tragedy, and romance of boxing like no one else. Featuring numerous historical and iconic photographs, The Night the Referee Hit Back is a fascinating and valuable collection for boxing fans and sports historians alike.

Mike Silver: Mike Silver is an internationally respected boxing historian and author. He has been an Inspector with the New York State Athletic Commission; a boxing promoter; a historical consultant and on-air commentator for 19 televised boxing documentaries; a curator of the “Sting Like a Maccabee: The Golden Age of the Jewish Boxer” exhibit at the National Museum of American Jewish History in Philadelphia; and a co-curator of the San Francisco Jewish Film Festival’s centerpiece program, “Jews, Boxing, and Hollywood.” Silver continues to research and write about the sport as a member of the International Boxing Research Organization (IBRO) and is the author of two critically acclaimed books: The Arc of Boxing: The Rise and Decline of the Sweet Science (2008) and Stars in the Ring: Jewish Champions in the Golden Age of Boxing: A Photographic History (2016). His website is mikesilverboxing.com.