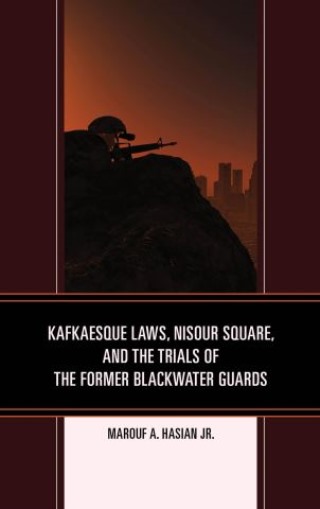 Kafkaesque Laws, Nisour Square, and the Trials of the Former Blackwater Guards

This book provides academics and lay persons with Kafkaesque readings of our memories of the 2007 Nisour Square shootings in Iraq. The author uses critical analyses of the rise of Blackwater, support for private security firms and private contracting, prosecutorial and defense preparations and the 2014 jury trial to argue that most observers have drastically underestimated the groundswell of support that existed for Erik Prince and many other defenders of military or security outsourcing. This book puts on display the cultural, legal, and political difficulties that confronted those who wanted to try former Blackwater security guards in the name of belated social justice.

Marouf A. Hasian Jr.: Marouf Hasian Jr. is professor of communication at the University of Utah and author of Representing Ebola: Culture, Law, and Public Discourse about the 2013–2015 West African Ebola Outbreak (Fairleigh Dickinson UP, 2016).