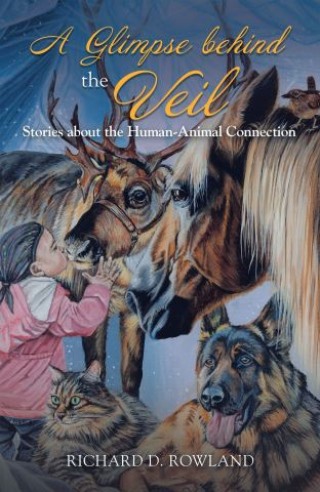 A Glimpse Behind the Veil

Stories About the Human-Animal Connection

Did a tiny bird in Texas really communicate with a horse and convince him it was okay to load on a trailer he’d never been on? Did a horse, after a three-year absence, know that its previous owner was present by hearing a harmonica being played? Did a horse, who had never acted up, hurt its owner on purpose so she would go to the doctor, where she discovered cancer had returned? Richard D. Rowland seeks the answer to fascinating questions as he explores the connection between humans and animals. As someone who was diagnosed with a rare blood cancer and given three years to live (more than twelve years ago), the human-animal bond is a subject he knows well. Animals caused him to rethink life and showed him things he never thought possible—and they led him to write his previous book, Unspoken Messages: Spiritual Lessons I learned from Horses and Other Earthbound Souls. Based on his interviews with people throughout the world, this book expands on how animals are misunderstood—and how they’re much smarter than most people believe.

Richard D. Rowland: In 2008, Richard was diagnosed with a rare blood cancer called Multiple Myeloma, related to his time in Vietnam. At the time, he was given 3 years to live. Animals were the catalyst for change in his life. They were messengers, speaking of a universe previously unknown to him. They thinned the veil and allowed him to see what had been hidden. The lessons they taught led to his first published book, Unspoken Messages. That book led to other people telling Richard about their experiences with the animal kingdom, which birthed the idea for this book. Richard is a two-tour veteran of the Vietnam war. He is retired from the Kentucky State Police after a twenty-eight-year career in law enforcement. He also owned and operated an equine boarding and training facility in his hometown of Elizabethtown, Kentucky for twenty years. His life has been spent in the company of animals. He strongly believes that animals and the peace their messages brought him are the reason he is still here today. They collectively removed fear from the journey.