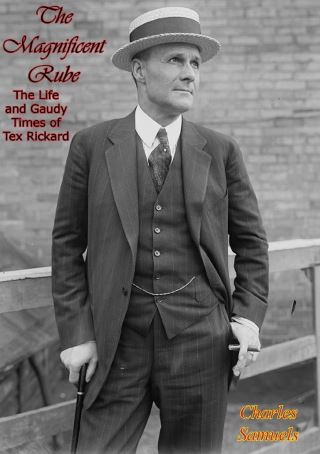 The Life and Gaudy Times of Tex Rickard

"From the moment he was born, Tex Rickard seemed to be wherever the action was. He entered the world as a posse was riding by— the posse was after the James brothers. Rickard became a trail cowboy at eleven, and a town marshal in his early twenties. He was up in the Yukon Valley, working in gambling houses, two years before the Klondike gold rush started; there he prospected, made and lost several fortunes. As a sports promoter, he arranged title fights between Joe Gans and Battling Nelson in 1906 and Jack Johnson and Jim Jeffries in 1910. He gained fame by creating—with the collaboration of Jack Dempsey—the world's first ''million-dollar gate'' (Dempsey fought Carpentier in 1921 at Jersey City to a paid crowd of 77,328.) Rickard made more on the bout than either of the fighters."