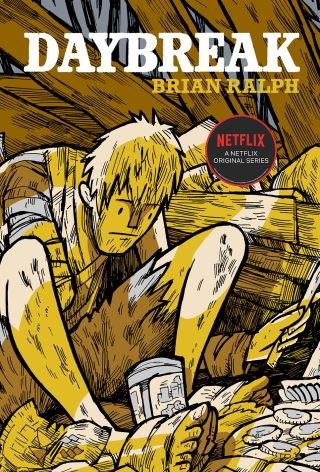 You wake up in the rubble and see a ragged, desperate one-armed man greeting you. He takes you underground to a safe space, feeds you, offers you a place to sleep, and then announces that he’ll take the first watch. It’s not long before the peril of the jagged landscape has located you and your new-found protector and is scratching at the door. What transpires is a moment-to-moment struggle for survival-The Road meets Dawn of the Dead. Daybreak is seen through the eyes of a silent observer as he runs from the shadows of the imminent zombie threat. Brian Ralph slowly builds the tension of the zombies on the periphery, letting the threat-rather than the actual carnage-be the driving force. The post-apocalyptic backdrop features tangles of rocks, lumber, I beams, and overturned cars that are characters in and of themselves. Drawing inspiration from horror movies, television, and first-person shooter video games, Daybreak departs from zombie genre in both content and format, achieving a living-dead masterwork of literary proportions. When released in 2011, Daybreak was a critical success, a YALSA Great Graphic Novel for Teens, and a TLA Maverick Graphic Novel. Now for the first time, Daybreak is being adapted into a Netflix Original series, executive produced by Aron Eli Coleite (Star Trek: Discovery, Heroes), Brad Peyton (Frontier, Rampage), and Jeff Fierson (Frontier, Rampage), starring Matthew Broderick. Read the book before it hits the small screen this fall!