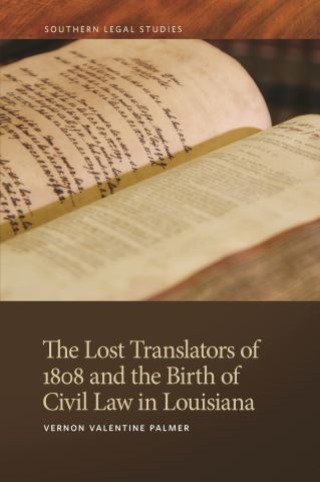 In 1808 the legislature of the Louisiana territory appointed two men to translate the Digest of the Laws in Force in the Territory of Orleans (or, as it was called at the time, simply the Code) from the original French into English. Those officials, however, did not reveal who received the commission, and the translators never identified themselves. Indeed, the “translators of 1808” guarded their secret so well that their identities have remained unknown for more than two hundred years. Their names, personalities, careers, and credentials, indeed everything about them, have been a missing chapter in Louisiana legal history.

Vernon Valentine Palmer: VERNON VALENTINE PALMER is the Thomas Pickles Professor of Law at Tulane University and the codirector of the Eason Weinmann Center for International and Comparative Law. He is the author of numerous books, including The Louisiana Civilian Experience, Through the Codes Darkly, and Mixed Jurisdictions Worldwide: The Third Legal Family.