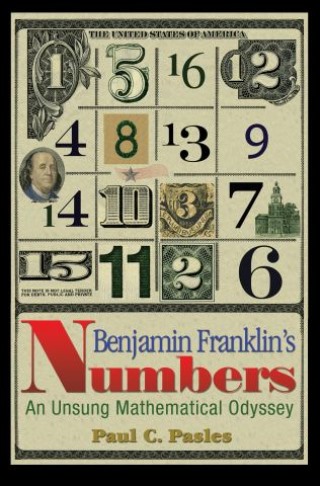 Few American lives have been as celebrated--or as closely scrutinized--as that of Benjamin Franklin. Yet until now Franklin's biographers have downplayed his interest in mathematics, at best portraying it as the idle musings of a brilliant and ever-restless mind. In Benjamin Franklin's Numbers, Paul Pasles reveals a side of the iconic statesman, scientist, and writer that few Americans know--his mathematical side.


In fact, Franklin indulged in many areas of mathematics, including number theory, geometry, statistics, and economics. In this generously illustrated book, Pasles gives us the first mathematical biography of Benjamin Franklin. He draws upon previously unknown sources to illustrate Franklin's genius for numbers as never before. Magic squares and circles were a lifelong fascination of Franklin's. Here, for the first time, Pasles gathers every one of these marvelous creations together in one place. He explains the mathematics behind them and Franklin's hugely popular Poor Richard's Almanac, which featured such things as population estimates and a host of mathematical digressions. Pasles even includes optional math problems that challenge readers to match wits with the bespectacled Founding Father himself. Written for a general audience, this book assumes no technical skills beyond basic arithmetic.

Benjamin Franklin's Numbers is a delightful blend of biography, history, and popular mathematics. If you think you already know Franklin's story, this entertaining and richly detailed book will make you think again.