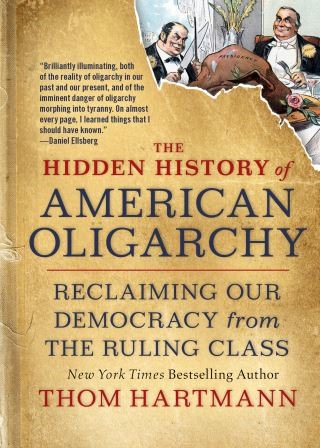 The Hidden History of American Oligarchy

Reclaiming Our Democracy from the Ruling Class

Thom Hartmann, the most popular progressive radio host in America and a New York Times bestselling author, looks at the history of the battle against oligarchy in America—and how we can win the latest round.

Billionaire oligarchs want to own our republic, and they're nearly there thanks to legislation and Supreme Court decisions that they have essentially bought. They put Trump and his political allies into office and support a vast network of think tanks, publications, and social media that every day push our nation closer and closer to police-state tyranny.

The United States was born in a struggle against the oligarchs of the British aristocracy, and ever since then the history of America has been one of dynamic tension between democracy and oligarchy. And much like the shock of the 1929 crash woke America up to glaring inequality and the ongoing theft of democracy by that generation's oligarchs, the coronavirus pandemic of 2020 has laid bare how extensively oligarchs have looted our nation's economic system, gutted governmental institutions, and stolen the wealth of the former middle class.

Thom Hartmann traces the history of this struggle against oligarchy from America's founding to the United States' war with the feudal Confederacy to President Franklin Roosevelt's struggle against “economic royalists,” who wanted to block the New Deal. In each of those cases, the oligarchs lost the battle. But with increasing right-wing control of the media, unlimited campaign contributions, and a conservative takeover of the judicial system, we're at a crisis point.

Now is the time for action, before we flip into tyranny. We've beaten the oligarchs before, and we can do it again. Hartmann lays out practical measures we can take to break up media monopolies, limit the influence of money in politics, reclaim the wealth stolen over decades by the oligarchy, and build a movement that will return control of America to We the People.

Thom Hartmann: Thom Hartmann is a progressive national and internationally syndicated talk show host. Talkers Magazine named him America’s #1 most important progressive host and the host of one of the top ten talk radio shows in the country every year for over a decade. A four-time recipient of the Project Censored Award, Hartmann is also a New York Times bestselling author of twenty-four books, translated in multiple languages. He was born in Michigan and retains strong ties to the Midwest, although he has lived in many regions. He now lives on the Columbia River in Portland, Oregon.