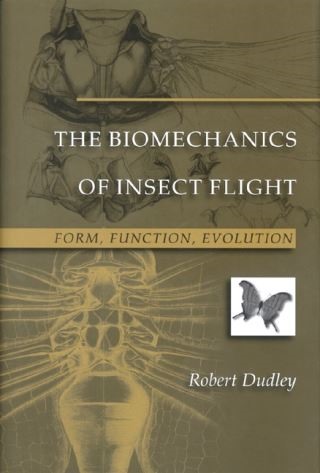 The Biomechanics of Insect Flight

From the rain forests of Borneo to the tenements of Manhattan, winged insects are a conspicuous and abundant feature of life on earth. Here, Robert Dudley presents the first comprehensive explanation of how insects fly. The author relates the biomechanics of flight to insect ecology and evolution in a major new work of synthesis.


The book begins with an overview of insect flight biomechanics. Dudley explains insect morphology, wing motions, aerodynamics, flight energetics, and flight metabolism within a modern phylogenetic setting. Drawing on biomechanical principles, he describes and evaluates flight behavior and the limits to flight performance. The author then takes the next step by developing evolutionary explanations of insect flight. He analyzes the origins of flight in insects, the roles of natural and sexual selection in determining how insects fly, and the relationship between flight and insect size, pollination, predation, dispersal, and migration. Dudley ranges widely--from basic aerodynamics to muscle physiology and swarming behavior--but his focus is the explanation of functional design from evolutionary and ecological perspectives.


The importance of flight in the lives of insects has long been recognized but never systematically evaluated. This book addresses that shortcoming. Robert Dudley provides an introduction to insect flight that will be welcomed by students and researchers in biomechanics, entomology, evolution, ecology, and behavior.

Robert Dudley: Robert Dudley is Professor of Biomechanics and Comparative Physiology at the University of California, Berkeley, and the author of numerous articles on the biomechanics of insect flight. He is also a Research Associate at the Smithsonian Tropical Research Institute in the Republic of Panama.