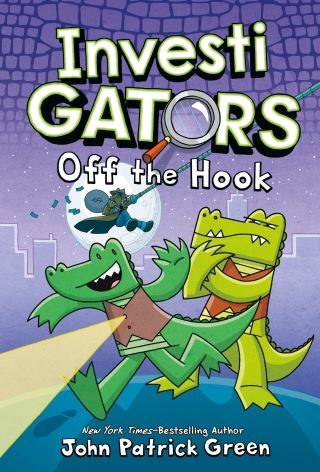 InvestiGators: Off the Hook

InvestiGators Mango and Brash don their fanciest vests for InvestiGators: Off the Hook, the next mystery in the hilarious adventure series from John Patrick Green

Sewer-loving secret agents Mango and Brash fight for the GATOR good in this zany adventure that will have readers HOOKED!

The InvestiGators are the best crime-fighting duo in the world. But not even their hi-tech training programs can prepare them for the return of their greatest nemesis, Crackerdile, in a shocking new form! Even worse, he’s creating a team of super villains! Faced with the choice between saving themselves or catching the crooks, can Mango and Brash make sure the gator good prevails?

John Patrick Green: John Patrick Green is a human with the human job of making books about animals with human jobs, such as Hippopotamister, Kitten Construction Company, and InvestiGators. John is definitely not just a bunch of animals wearing a human suit pretending to have a human job. He is also the artist and co-creator of the graphic novel series Teen Boat!, with writer Dave Roman. John lives in Brooklyn in an apartment that doesn't allow animals other than the ones living in his head.