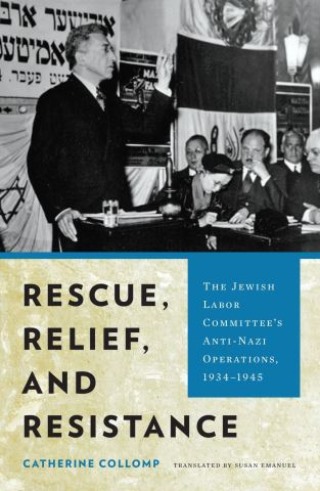 Rescue, Relief, and Resistance: The Jewish Labor Committee's Anti-Nazi Operations, 1934–1945 is the English translation of Catherine Collomp’s award-winning book on the Jewish Labor Committee (JLC). Formed in New York City in 1934 by the leaders of the Jewish Labor Movement, the JLC came to the forefront of American labor’s reaction to Nazism and antisemitism. Situated at the crossroads of several fields of inquiry—Jewish history, immigration and exile studies, American and international labor history, World War II in France and in Poland—the history of the JLC is by nature transnational. It brings to the fore the strength of ties between the Yiddish-speaking Jewish worlds across the globe. Rescue, Relief, and Resistance contains six chapters. Chapter 1 describes the political origin of the JLC, whose founders had been Bundist militants in the Russian empire before their emigration to the United States, and asserts its roots in the American Jewish Labor movement of the 1930s. Chapters 2 and 3 discuss how the JLC established formal links with the European non-communist labor movement, especially through the Labor and Socialist International and the International Federation of Trade Unions. Chapter 4 focuses on the approximately 1,500 European labor and socialist leaders and left-wing intellectuals, including their families, rescued from certain arrest and deportation by the Gestapo. Chapter 5 deals with the special relationship the JLC established with currents in the Resistance in France, partly financing its underground labor and socialist networks and operations. Chapter 6 is devoted to the JLC’s support of Jews in Poland during the war: humanitarian relief for those in the occupied territory under Soviet domination and political and financial support of the combatants of the Warsaw ghetto in their last stand against annihilation by the Wermacht. The JLC has never commemorated its rescue operations and other political activities on behalf of opponents of fascism and Nazism, nor its contributions to the reconstruction of Jewish life after the Holocaust. Historians to this day have not traced its history in a substantial way. Students and scholars of Holocaust and American studies will find this text vital to their continued studies.

Catherine Collomp: Catherine Collomp, emerita professor of American history at Université de Paris, is a French researcher in the fields of labor and immigration history. She is also the author of Entre classe et nation, Mouvement ouvrier et Immigration aux Etats-Unis, 1880–1920 and the editor of An American in Hitler’s Berlin: Abraham Plotkin’s Diary, 1932–1933.