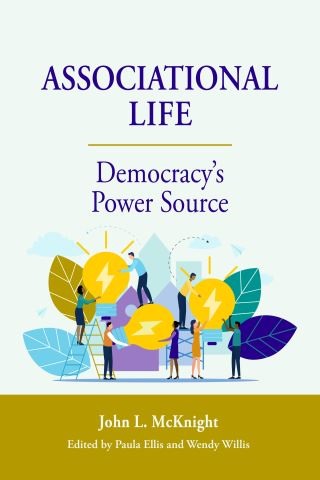 AS MORE AND MORE AMERICANS decry the state of affairs in their communities and in the nation, John McKnight reminds us that the ability to change things for the better lies in ourselves and our neighbors. Long an evangelist for the power of citizen associations, he makes the case that these local groups embody the means for individuals to get things done as well as the glue that holds communities together. His cogent and grounded observations of how citizen associations are formed, how they function to produce public goods, and how they relate to government and other institutions, make this a handbook intended to inspire a new generation of organizers and community- based practitioners.

John McKnight: John L. McKnight was raised in seven neighborhoods and small towns in Ohio in the 18 years before he left to attend Northwestern University. Following a three-year stint in the US Navy, he returned to Chicago where he worked in, and directed, several civil rights organizations. In the 1960s, McKnight was recruited into the federal government to work in an agency that created the affirmative action program, and later became Midwest director of the US Commission on Civil Rights. He returned “home” to Northwestern in 1969 to help develop the Center for Urban Affairs. McKnight is currently co-director of the Asset-Based Community Development Institute (ABCD), which he helped found, and a senior associate of the Kettering Foundation. Wendy Willis is a writer living in Portland, Oregon. Winner of the Dorothy Brunsman Poetry Prize, she has published two books of poetry. Willis is a lawyer, the executive director of the Deliberative Democracy Consortium, and the founder and director of Oregon’s Kitchen Table at Portland State University.A former Vice President of Strategic Initiatives at the Knight Foundation, Paula is a senior associate with the Kettering Foundation; a trustee of the Poynter Institute for Media Studies and a director of the National Conference on Citizenship. She also is president of Paula Ellis and Associates, a consulting firm headquartered in Charleston, S.C.