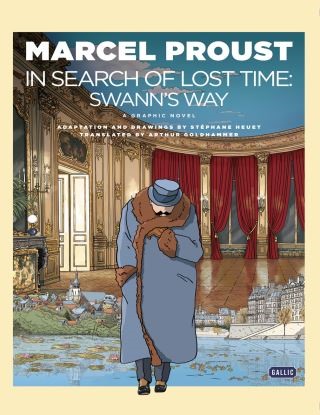 Proust’s oceanic novel In Search of Lost Time looms over twentieth-century literature as one of the greatest, yet most endlessly challenging, literary experiences. Now, in what renowned translator Arthur Goldhammer says might be “likened to a piano reduction of an orchestral score,” the French illustrator Stéphane Heuet re-presents Proust in graphic form for anyone who has always dreamed of reading him but was put off by the sheer magnitude of the undertaking.

This graphic adaptation reveals the fundamental architecture of Proust’s work while displaying a remarkable fidelity to his language as well as the novel’s themes of time, art, and the elusiveness of memory.

Marcel Proust: Marcel Proust was born in Paris in 1871. His family belonged to the wealthy upper middle class, and Marcel began frequenting aristocratic salons at a young age. Leading the life of a society dilettante, he met numerous artists and writers. He wrote articles, poems, and short stories (collected as Les Plaisirs et les Jours), as well as pastiches and essays (collected as Pastiches et Mélanges) and translated John Ruskin’s Bible of Amiens. He then went on to write novels. A sufferer of asthma, he died from poorly-treated Bronchitis in 1922; he is buried in the Père-Lachaise Cemetery in Paris (Division 85).