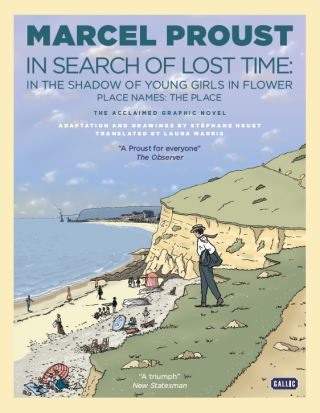 In the Shadow of Young Girls in Flower (Place Names: The Place) (Graphic Novel)

‘Captures the essence of Proust beautifully’ The Economist

After the New York Times-bestselling adaptation – hailed as a ‘Proust for the people’ – this centenary edition of the Goncourt-winning In the Shadow of Young Girls in Flower unveils the masterpiece beyond the madeleine.

The defining French novel, Proust’s In Search of Lost Time is best known for the Combray scenes which appear near the beginning of the first of the book’s seven volumes. For many, the discovery of Proust stops here: the sheer scale of the text and its perceived difficulty discouraging them from reading on.

This beautiful second volume of Stéphane Heuet’s acclaimed graphic novel adaptation invites the reader to go further, accompanying the narrator as he enters adolescence during a summer of infatuation, switching affections and increasing social awareness in the beach resort of Balbec. In the Shadow of Young Girls in Flower introduces characters who will go on to dominate future volumes, such as Albertine, the narrator’s feelings for whom will be dissected to the minutest degree alongside reflections on the mutability of perception and a biting, witty analysis of social class, snobbery and prejudice.

Marcel Proust: Marcel Proust was born in Paris in 1871. His family belonged to the wealthy upper middle class, and Proust began frequenting aristocratic salons at a young age. Leading the life of a society dilettante, he met numerous artists and writers. He wrote articles, poems, and short stories (collected as Les Plaisirs et les Jours), as well as pastiches and essays (collected as Pastiches et Mélanges) and translated John Ruskin’s Bible of Amiens. He then went on to write novels. He died in 1922.