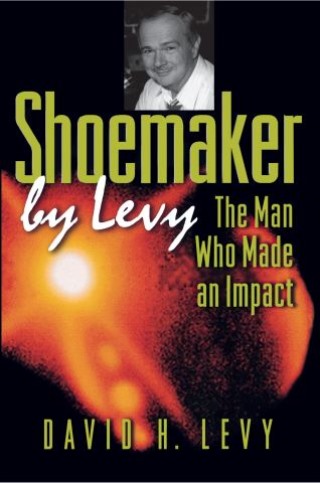 The Man Who Made an Impact

It was a lucky twist of fate when in the early1980s David Levy, a writer and amateur astronomer, joined up with the famous scientist Eugene Shoemaker and his wife, Carolyn, to search for comets from an observation post on Palomar Mountain in Southern California. Their collaboration would lead to the 1993 discovery of the most remarkable comet ever recorded, Shoemaker-Levy 9, with its several nuclei, five tails, and two sheets of debris spread out in its orbit plane. A year later, Levy would be by the Shoemakers' side again when their comet ended its four-billion-year-long journey through the solar system and collided with Jupiter in the most stunning astronomical display of the century. Not only did this collision revolutionize our understanding of the history of the solar system, but it also offered a spectacular confirmation of one scientist's life work. As a close friend and colleague of Shoemaker (who died in 1997 at the age of 69), Levy offers a uniquely insightful account of his life and the way it has shaped our thinking about the universe.


Early in his training as a geologist, Shoemaker suspected that it wasn't volcanic activity but rather collisions with comets and asteroids that created most of the craters on the moon and most other bodies in the solar system. Convincing the scientific community of the plausibility of "impact theory," and revealing its power for penetrating mysteries such as the extinction of the dinosaurs and the timing of the Earth's eventual demise, became Shoemaker's mission. Through conversations with Shoemaker and his family, Levy reconstructs the journey that began with a young geologist's serious desire to go to the moon in the late1940s. Sent by the government to find a way to harvest plutonium, Shoemaker instead found evidence in desert craters for what became his impact theory. While he never became an astronaut, he did become the first geologist hired by NASA and subsequently set the research agenda for the first manned lunar landing.


After a series of victories and setbacks for Shoemaker, the collision of Shoemaker-Levy 9 with Jupiter provided the most convincing proof to date of the role of impacts in our solar system. Levy's explanation of the scientific reasoning that guided Shoemaker in his career up to this dramatic point--as well as his personal portrait of a man who found white-water rafting to be an easy way to relax--sets these fascinating events in a human scale. This biography shows what Shoemaker's legacy will be for our understanding of the story of the Earth well into the twenty-first century.

David H. Levy: David H. Levy has discovered twenty-one comets, eight of them using his own backyard telescope. Science Editor for Parade magazine, he also writes the monthly "Star Trails" column in Sky and Telescope. Levy is the author of many books relating to astronomy, from beginners' observing guides to such recent popular accounts as Comets: Creators and Destroyers. He has written two other scientific biographies: The Man Who Sold the Milky Way: A Biography of Bart Bok and Clyde Tombaugh: Discoverer of Planet Pluto. Levy's awards include an Emmy for his role in writing the 1997 Discovery Channel documentary Three Minutes to Impact.