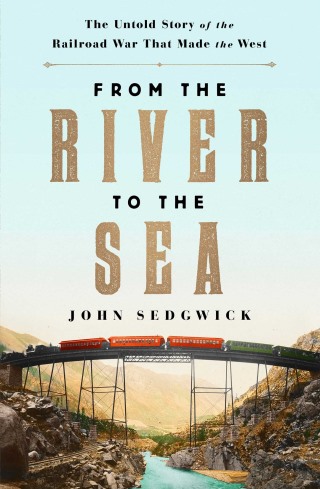 From the River to the Sea

The Untold Story of the Railroad War That Made the West

“Riveting...A great read, full of colorful characters and outrageous confrontations back when the west was still wild.” —George R.R. Martin

A propulsive and panoramic history of one of the most dramatic stories never told—the greatest railroad war of all time, fought by the daring leaders of the Santa Fe and the Rio Grande to seize, control, and create the American West.

It is difficult to imagine now, but for all its gorgeous scenery, the American West might have been barren tundra as far as most Americans knew well into the 19th century. While the West was advertised as a paradise on earth to citizens in the East and Midwest, many believed the journey too hazardous to be worthwhile—until 1869, when the first transcontinental railroad changed the face of transportation.

In From the River to the Sea, bestselling author John Sedgwick recounts, in vivid and thrilling detail, the decade-long fight between General William J. Palmer, the Civil War hero leading the “little family” of his Rio Grande, and William Barstow Strong, the hard-nosed manager of the corporate-minded Santa Fe. What begins as an accidental rivalry when the two lines cross in Colorado soon evolves into an all-out battle as each man tries to outdo the other—claiming exclusive routes through mountains, narrow passes, and the richest silver mines in the world; enlisting private armies to protect their land and lawyers to find loopholes; dispatching spies to gain information; and even using the power of the press and incurring the wrath of the God-like Robber Baron Jay Gould—to emerge victorious. By the end of the century, one man will fade into anonymity and disgrace. The other will achieve unparalleled success—and in the process, transform a sleepy backwater of thirty thousand called “Los Angeles” into a booming metropolis that will forever change the United States.

Filled with colorful characters and high drama, told at the speed of a locomotive, From the River to the Sea is an unforgettable piece of American history “that seems to demand a big-screen treatment” (The New Yorker).

John Sedgwick: John Sedgwick is the bestselling author of Blood Moon: An American Epic of War and Splendor in the Cherokee Nation, and twelve other books: four works of literary nonfiction, two novels, a family memoir, and five collaborations.  He has also written extensively for The Atlantic, GQ, Newsweek, Esquire, and Vanity Fair. He is married to the CNN analyst and Financial Times columnist Rana Foroohar, and lives in Brooklyn, New York.